Best and Worst Aspects of Internet (for Final Exam, Blog Post Section No.3)

Internet is a great invention in human-history. It is even called as a revolution and has been giving amazing impacts in the world since it was born. Economical system and communication style have been reshaped while the expansion of Internet. The brightest side of Internet is that it enables people to have easy and fast, even real time, global communication, but at the same time, the great advantage causes a serious disparity between people who can use Internet and who can't.

The best aspect of Internet is that it is a tool of world wide communication. Wikipedia defines the Internet as "The Internet is a global system of interconnected computer networks that use the standard Internet protocol suite (TCP/IP) to serve billions of users worldwide"(Wikipedia). The aspect creates a new style of people's communication because distance becomes meaningless on the Internet. For example, "It is now entirely possible for someone in rural America to carry on conversations with people from Moscow, Paris and Jakarta, all at the same time" (eHow.com). In this great development of communication style, social networking sites work crucial roles while millions of users access to these sites from many countries. Businesses also got great advantages. Internet gives businesses a  new place for marketing and advertising. For instance, "Creating a website benefits businesses because people can market their products and services without using traditional marketing techniques such as fliers, mailings and newspaper ads" (eHow.com). Internet also enables companies to have large and world wide customers data bases on the Internet, and it also enables to reduce office supplies because companies don't have to pay for expensive international mails (eHow.com). The global communication is the best advantage and aspect of Internet.

The worst aspect of Internet is digital divide, basically caused by disparity between rich and poor. Digital Divide Institute defines the term, digital divide, as "the gap between those who can benefit from digital technology and those who cannot" (Digital Divide Institute). Even though the Internet have been spread widely, it doesn't mean all people have an access to Internet. Here's a statistic of Internet users in the world. It shows 30% of people can use Internet and 70% of people can't in 2011. This map (treehugger.com) show which countries uses internet a lot more visually. It is obvious that developed countries dominate the Internet share. Thus the majority of 30% people who use the Internet live in developed countries. It enlarges the gap between rich and poor more and more. Some groups are now working hard to close the digital divide by inventing Solar WiFi system, sending people with technical skills and providing low costs PC (treehugger.com). The biggest dark side, digital divide, will remain as the worst aspect of Internet until everyone all over the world get their access to the global communication.

The best aspect of Internet is that it enables people communicate globally, and the worst aspect is the digital divide. Just because the advantage is so big, the disadvantage is surprisingly big as well. The powerful revolution of Internet have made a light side and a dark side at the same time.

A change of emotion

A change of emotion (in two panels)!

This will be my last work of ds106 assignment.
The description says...

Here's what I did! 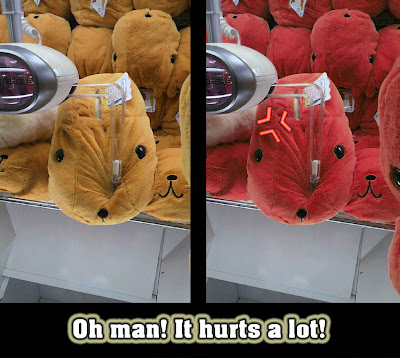 This is a picture that I took a year ago at a game center in Tokyo.
I tried to express the change of emotion through the change of colors. I don't know if it works but I hope it does!
I used Adobe Photoshop Elements 7.0.
投稿者 Komuro_tuj 時刻: 17:46 2 件のコメント:

This is my fourth work of ds106 assignment.
All I needed to do was just pick up a picture and change the colors. I couldn't find any good one but this one. Such a wonderful picture that I took years ago! 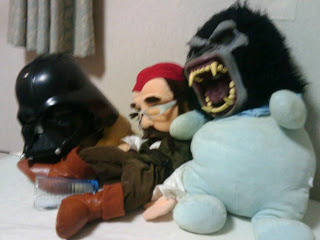 Then I changed the colors  into sepia tone. 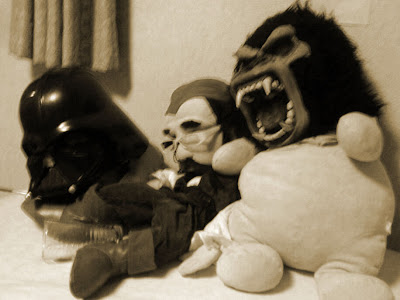 I learned that sepia makes everything cool.
～How I made it～
Put sepia effect on the picture.

Where did you come from?!

Wait, where'd that guy come from?!

I chose the assignment for my third ds106 work.
The description says...


Photoshop someone(s) (or something(s)) into a picture that isn't supposed to be there. 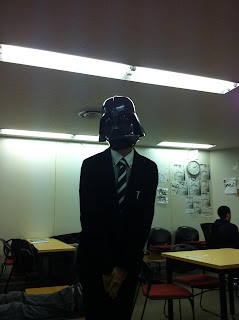 Me at school. And here's something. 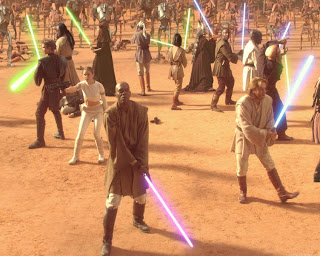 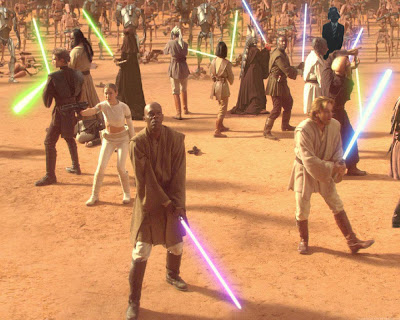 Here's second work of ds106 assignment.
It was not very difficult but I enjoyed a lot! Thank you Jim Groom. 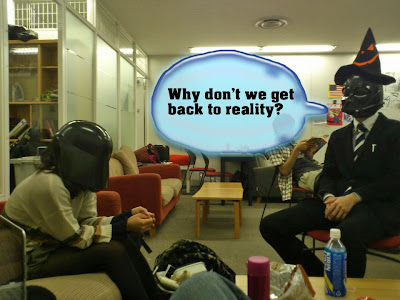 The Darth Vader guy is me. And she is my wonderfully beautiful girlfriend.
This is how TUJ students escape from their reality.
～How I made it～
Put spubble. That's all!

Mac? Windows? Which is safer?? Malware. I love my girlfriend but I can't love Malware. Everybody hates them. We learned about them in class. They are such big threats for many computer users. I've suffered from them several times, too. I wish we didn't have any Malwares on the internet and thus we didn't have to pay for any expensive anti-malware software!

By the way, there's a computer OS that repeatedly claims "I'm strong! You're safe!". Do you know? Click this link and check it out. Yes. Mac OS! Watch the video below, an advertisement by Apple, which promotes its anti-Malware feature. I'm a Windows user. Actually, majority of computer users use Windows (statistics here!). Then Mac OS is more secure than Windows OS? Isn't it wonderful if the advertisement is really true!? Hey everyone! Throw your Windows out of a window! Now Malwares. Go extinct!  Wait... I wonder.... is it really true??

I found a web page written about Malwares threatening Mac OS (link here!). OMG! Malwares targeting on Mac do exist!  It seems Mac is safer than windows but not totally safe. Also, here's shocking quote from another page (link here!).


The general consensus among security researchers is that there's nothing about the Mac that makes it inherently more secure than Windows -- indeed, the Mac platform has been easily penetrated in the Pwn2Own hacking contest in years past. But Windows has always been a juicier target for malicious hackers because it has much larger market share than the Mac.

Therefore, conclusion about this question might be that OS is safer when less people use it because less Malwares target at it!


OK. It seems you can't totally escape from threats of Malware. I'll keep using Windows anyway. I'm a nice, Eco-friendly guy. But everyone, don't stop throwing your Windows out of a Window. Please make it less popular and I can use my computer more safely.


Question for the final exam
The first computer viruses were designed to cause damages. True or False?

The Four Icon Challenge!
I chose this one for my very first ds106 assignment.
Here is my work. What movie this is? It is actually a series of movies but... anyway can you guess??